Humanity in the Corona era 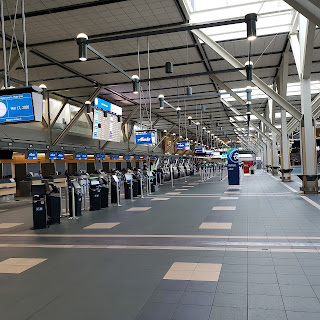 Let's face it the mixed signals from our leaders have not realized our situation any better. Wash your hands, don't touch your face and maintain six feet from everyone. And in the next breath up to 200,000 people in this country will be killed this year by this enemy and better than half will be sickened by this disease. Talk about confusing people! I mean which one is it?

It was FDR who famously said "This day will live in infamy." A rousing and inspiring speech given to a nation and the world who were desperate to know the world was not going to cease. We are again living in a time that will test our mettle in a way not measured in modern times. The heroes in this chapter will not sport stars on their collar nor hold an impressive title. Nor will they have a staff or an impressive desk. They will be the low wage earners who are making sure the trains move on time. Serving sack lunches through a drive up window or bagging your groceries. Bearing the scars of teenage acne or the beleaguered and hollowed out eyes of men and women working to keep what little they have.

The front lines will be taken and surrendered by people in medical scrubs fighting an almost unwinnable fight against an insidious foe who knows no bounds and shows no mercy.

We all recognize the uncertainty in our communities, states and country we are living in and our realities are sometimes shifting by the moment. Crossing the street to avoid what could be a hidden enemy hiding in the particles of expelled air. This is our new norm. Hoping and praying it will slip away as suddenly as it appeared or to wake from a cruel night terror. It would be easy to give in and surrender or lash out in anger, looking outward and upward for your guardian angel to draw you to safety. That is how it would be written in the movies or books. What will preserve us in the end will be humanitarian aid.

Humanitarian aid does not invariably come in the form of grand gestures from governments or large corporations. It also can occur in the form of gratuitous payments to the clerk at the check out counter or doing the laundry for a nurse whose just finished a grueling twelve hour shift. Sheltering in place to keep from winding up on the front lines or becoming a tragic statistic.

Today, more than ever we must fight against the temptation of giving in to the fear of what sometimes feel is the inevitable. Kindness to others must claim the place of pushing our humanity to the side. Let us not stand in the shadows of uncertainty or dive headlong into despair.

So I am asking one and all to find some means to provide humanitarian aid to those called into service who serve us. Make sure they know how much you value the sacrifice they are making. It is the least and also the most we can do for each other.
Posted by Roger Peppercorn at 6:02 PM