I wanted to thank Bekah from @mthrhood_moment for the interview. Check it out! https://lnkd.in/eejRKbP And then hashtag#click over to my website and hashtag#buy a copy rogerpeppercorn.com hashtag 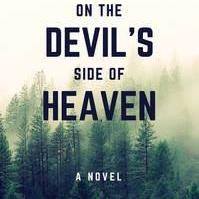 With the drop of a judge's gavel, Walt Walker has officially lost everything. The one-time police officer is now without his badge and gun and the moral certainty of right and wrong that had kept him grounded. He has also lost his wife and his two kids to her new boyfriend. Even his sister has turned against him, and it's all because of his ex-best friend, who also happens to be his brother-in-law. Now Walt, sans gun, gets his badges from an Army Navy store and spends his days in South Florida, working for a boutique insurance firm as their investigator. He spends his nights in dive bars, trying to forget the mess he has made of his life. Meanwhile, retired hitman Ronald Jacobs is living in the shadows as a respectable gentlemen farmer, far from the reach and pull of his past life. With Walt whiling away the hours as an insurance investigator and Ronald living the simple life on a farm, what could possibly go wrong?Turns out, plenty. In the action-packed thriller, On the Devil's Side of Heaven, author Roger Peppercorn has woven an entertaining tale of a chance encounter that reunites estranged brothers-in-law and sets them on a collision course of violence and retribution. Hunted by contract killers, the law and corporate bag men, they are pursued across the barren adobes and sweeping vistas of the Mesa Valley in Western Colorado.

I had a chance to interview the author to learn more.

What was the inspiration for this book?
Several years ago, my wife and I packed up the kids and went to my parents for Thanksgiving. While we were there I ran into a childhood friend whom I hadn't seen in years. He invited us up to his place which is in a fairly remote area outside of Loma CO. Now when I say remote it's very remote. His driveway is a dirt road that's not marked nor is it on any map and GPS units think you're driving in across the adobes.

He and his wife built a very comfortable home. But other than electricity the county provides they are off the grid. You can't see his neighbors. But the sweeping views are breathtaking. I thought then that if you wanted to get away this is the kind of place you would go.

So from that point it took me almost two years to fully flesh out a story and then ten months to write it.

I like the idea of characters who are deeply flawed and start off from a place of struggle. What I find fascinating are the little decisions we make in the moment that at the time are meaningless, but down the road you discover are the catalyst for why you are where you are. Plus, when you toss in lifelong relationships that are complex and not easily divested I find those are the ingredients of a good story.

The three main characters, Walt, Ronald and Jessica are the base of all of that. Walt and Jessica are siblings and Jessica is married to Ronald a life long friend to both. What I think makes On The Devil's Side of Heaven different from other books of the same genre is you get to see them at a very human level. The make the right decisions for the wrong reasons and the wrong decisions for the right reasons. The relationships are very complex and intertwined. Walt is a broken ex-cop with addiction issues. Ronald is a semi retired hired gun thug and Jessica is the glue that binds them together.

Both of them start off where you would expect them to be on the moral compass, but as the story progresses, you watch them walk towards the center and eventually cross their own moral divide.

How did you come up with the title?
On The Devil's Side of Heaven is a title that was a long time in the making but eventually came about because of a line from the book. There is a scene in an early chapter where you see Walt in a bar. He just came from divorce court and where the last vestige of his life has been taken. As he is sitting there drowning his sorrows in "bourbon two fingers and make it neat and don't bother asking if I need more. Just assume the answer is yes", he gets a call from Jessica. This is the first time you see the relationship and begin to understand the dynamic between the three. You also get a hint there is a lot of water under the bridge, but in the end she is his sister.

When he hangs up the phone there is a bumper sticker on the bar that says. "Cast not others onto the devil's side of heaven, lest you be cast in with them"

Now that line is one of those things that comes about because I'm in the car for hours in the middle of nowhere and all I'm doing is working through a few different scenes and dialogue. This is how I do a lot of my writing.

My day job requires me to spend a lot of time behind the wheel and on airplanes. My mind then tends to wander into the story which is where I watch the story play out.

That line came from a drive from Albuquerque to Denver. And when it landed I pulled over and wrote it down. You see that line play out throughout the book and actually helped drive the story.

There is a new line I'm working on for the follow up book which is titled The Sometimes Long Road Home. Which I am writing now.

What types of readers will enjoy this book?
On The Devil's Side of Heaven is listed as a crime thriller on Amazon and this is one of those things I had to clearly define to Wallace Publishing when they picked me up. So officially it's mostly men 18-55 who enjoy action thrillers. But the book is really more character driven with the crime piece almost as an extension of the story.

There are shootouts, fist fights, and cop stuff, but it's not a procedural and the violence is not gratuitous.

The dialogue is authentic to who these people are. I'm also not trying to teach you anything nor preach. It's an action packed, funny, fast paced thriller. Anyone who likes a guilty pleasure read or just wants to escape into this made up world I've created.

The biggest compliment I get fairly often is how fast the reader gets sucked into the story and just can't put it down.
Posted by Roger Peppercorn at 7:13 PM